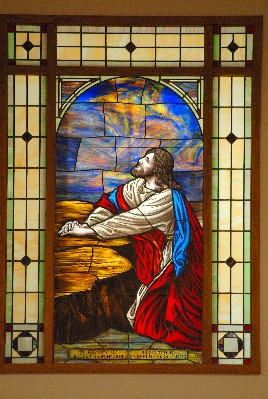 The current sanctuary, our third one, was constructed in 1895.  Its planning and construction were done by local members of the church. The system of rafters and trusses which support the roof have been described as an engineering masterpiece!

The memorial stained glass windows were added in 1938 and the building remodeled in 1954. A foyer in the building’s front and a choir loft behind the pulpit were major features of the newly remodeled sanctuary. The Sunday school annex was added in the 1940’s and the fellowship hall in 1960.

A disastrous fire struck the building on May 15, 1975 but the rebuilt sanctuary retains most of the original features so dear to the heart of the membership. The seating capacity was expanded and the choir loft enlarged. Considerable attention was given to construction features to accommodate the new Rogers organ. The stained glass (except the Gethsemane Scene) are the original 1938 windows.

Our current membership is just above 90.

The Reverend Jeanne Simpson is our current pastor.

We offer you an invitation to attend church as part of the body of Christ through participation in our worship and activities. Before or after services, please notify one of the elders if you want to become a member of Philadelphia Presbyterian. We look forward to having you visit and we would love to have you join us!